(Vancouver) The corner of Nelson and Granville is going to be getting a new name tonight in honour of much loved and celebrated Ambulance Paramedics of BC member.

Bob Hurly was one of the original members of the BC Ambulance Service when the Province of BC amalgamated ambulance services under one organization in 1974. Hurly started his career with Metropolitan Ambulance in the early 70’s and went on to be the lead-driving instructor for the service. He completed his career as a District Supervisor in Vancouver when he passed away in 2008 unexpectedly to cancer.

“Bob would frequently station himself at the corner of Nelson and Granville during night shifts to meet with crews or be available to respond to calls,” said Al Pruden – Regional Public Relations Officer.  “Bob will be sorely missed, but now we will have a lasting tribute to a beloved cohort and legend of the Ambulance Paramedics of BC and BC Ambulance Service.”

The corner has become a common rally point for not only ambulances, but also police. During the 2010 Winter Olympics, as well as, the Canucks playoffs in 2011 the corner served as a command post for Vancouver Police patrolling the Granville Entertainment District.

With the support of Vancouver Police Sargent Wally Argent, this corner will be formerly dedicated as “Hurly’s Corner” on the evening of June 22, 2012 at 8pm.

Paramedics, Dispatchers and family of Bob Hurly will come together to remember Bob at the site of his favorite places to work. A sign will be erected by the City of Vancouver marking the Northwest corner in his memory. 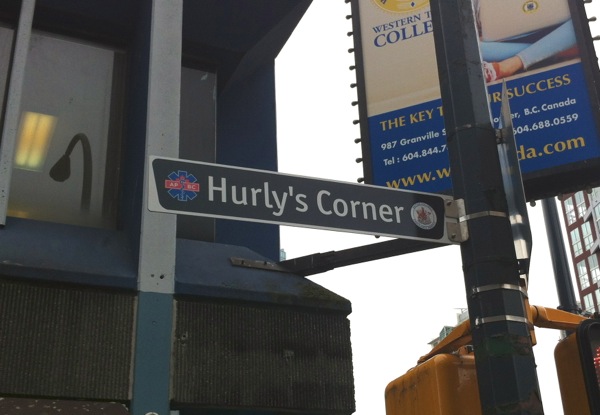